It Works! Check out our 375+ Success Testimonials 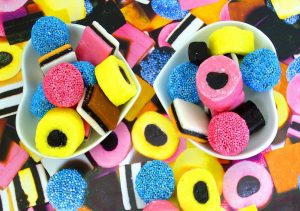 I’m my own guinea pig.  And that’s a good thing. I work on myself (hypnotically and NLP Nelp-notically) all the time to improve my life! And Michael works with me, too. I have a cute story to share!

We were out and about on a Sunday running errands, and we ended up in a little arcade of shops that includes a candy store. One of those colorful “every-kind-of candy-you-can-imagine” in bulk bins stores. PLUS, it was also an ice cream shoppe and coffee shop. Not that I was drawn through any particular URGE into the candy store, but I thought: it’s a good time to test my responses. To chocolate, to sugar, to CANDY! So, I went in!

Now, you have to know my history a little. Candy was MY THING. All my life. We’re talking addictive behavior. It was the focus of much of my life, pretty much. Eating it, finding it, buying it, hoarding it, making it, too. Having it around made me feel safe. But mostly, my focus was buying it and eating it. I think I learned that from my mom–she had candy every day of her life. It was always around. And I ate it every day, too. Too much of it. As a kid, Halloween was my favorite holiday. Candy!!! Yay!!! As an adult and bargain hunter, Halloween was still my favorite holiday, especially the day after Halloween and also the day after Valentine’s and other “chocolate holidays.” Half price candy! I was delirious with joy!

I remember those days, but I no longer feel the pull. Of sugar. Hypnosis is wonderful for focusing your mind on healthy choices, and I’ve been doing it for years now. I don’t eat candy at all. And I don’t think about it–in general. But here was this candy store, so I thought: “Let’s go test!”

I went inside the store and looked around, and also looked INside me to see how I was feeling. The main question: “Did I want any? Did the candy look appealing to me? Was there a temptation to buy any?” No, no, and no. But here’s the funny thing. All these bins, all these choices, and the only thing I could notice were the candies I don’t like. The ones I’ve NEVER liked. Like root beer flavor (yuck!) gummies, like LICORICE. Black licorice. Hate it!!! I wouldn’t eat that in a million years–even before during my heydey of sugar abandon. Sweet-tart legos. Also yick. My mind was sorting for “yick,” and nothing looked good.

Suddenly, in my imagination, everything was licorice. Those horrid bins of black licorice “all sorts.” That’s what I saw, that’s what I felt (I would never eat that), and then I left the store. Somehow, all the nice, fancy chocolates never caught my eye or attention. The ice cream–didn’t notice it. It was a store full of black licorice all sorts. “Let me OUT of here!!”

One more quick story, similar in nature.  Years ago, I was in Las Vegas assisting with a hypnosis training.  I brought in some bags of M&M’s for the group. Giant bags containing many mini bags–those little treat size bags of M&M’s–like you get at Halloween!  Anyway, apparently, they were tempting one of my friends there, named Kerry. His downfall: peanut M&M’s. He asked me to do some hypnosis and NLP with him to help him with the candy and sugar cravings. I did. He also reported a remarkably interesting hallucination effect. Weirder even than mine! He told me that next morning he literally DID NOT SEE the packages of M&M’s on the table. He could see the fabric of the tablecloth underneath, kind of buckled and wrinkled like something was on it but didn’t see the candy. He was freaked! And admiring. And happy. So, he didn’t eat any. You don’t eat what you don’t see.

The upshot of all this: when you choose healthy eating, your unconscious mind “makes it so.” Like Jean Luc Picard on the bridge of the Starship Enterprise. “Make it so!!” My unconscious mind was sure doing it in a very fascinating and creative way. Yes, if all candy was black licorice, I wouldn’t touch it. And I don’t.  Feelin’ good, still losing weight here.

Learn how hypnosis and NLP can improve your life, sign up below for our FREE e-newsletter!   The Monthly Trance. Click, or text MINDWORKSHYPNO to 22828.
Click to Get Tranced!
For Email Marketing you can trust.

Here's proof positive that hypnosis works!!  Check out the before/after picture, Connie used hypnotic skills to let go of weight herself.  You want a hypnotherapist who has expertise and success with the power of these awesome techniques.

MORE ABOUT YOUR HYPNOTHERAPISTS

She also owns and operates a private Washington-State licensed career school, Mindworks NLP, and offers training in NLP and hypnotherapy with Michael.

Connie is a published author and creator of several hypnosis self-help audio cd products.  (See our products page here!)  She conducts a series of self-hypnosis workshops and teaches hypnosis for adult continuing education programs in the Seattle area.

Michael Brannan, CHt, is former President of the Washington State Chapter of the NGH (National Guild of Hypnotists).  He has achieved these professional certifications:

Michael is a published author of the book, "Beyond the Conscious Mind: The Magic of Self Hypnosis."

Michael is available at this time for private sessions evenings and weekends.

Connie and Michael Brannan.  Master Hypnotists!  Together, we are the Mindworks Hypnosis and NLP team, full of powerful tools for your success. Now.  C'mon, Seattle, hypnosis is powerful stuff, experience this success for yourself!

You want therapists who are ethical as well as talented.  We are an Accredited Business of the Better Business Bureau of WA. and have achieved an "A+" Rating.

The Society of Neuro Linguistic Programming®

Connie and Michael are registered with Washington State as Certified Hypnotherapists.